Located in the former Maneke Jewelers storefront on Washington Avenue in Alton, Reiniger Jewelers is excited to expand its footprint to the Riverbend

GODFREY, IL – With a three-day celebration for their grand opening and a recent ribbon-cutting ceremony hosted by the RiverBend Growth Association, Reiniger Jewelers has officially arrived in the Riverbend. It is now open in the former Maneke Jewelers location in Alton at 1633 Washington Avenue. 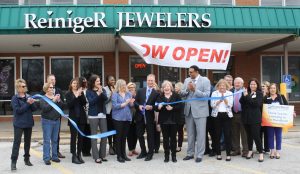 There were about 25 people on hand to join in the ribbon-cutting ceremony, including Alton Mayor David Goins and RBGA Member Engagement Director Stefanie Withers. The grand opening included refreshments, gifts for those who stopped in during its three-day celebration, a drawing for six different prizes, and the store’s grand prize of a $1,500 shopping spree.

Owner and third-generation independent jeweler Paul Reiniger bought the Alton business from Charlie Maneke at the end of December 2021, just weeks after opening a third location in Effingham in November.

“Paul knew Charlie was retiring in Alton, and he called him to see if he could buy any equipment for his new Effingham location. Charlie explained that he wanted to find someone to purchase all his items together. At that time, Paul dismissed the idea. But then Paul and Charlie talked again around the second week of December,” said Reiniger’s Assistant Noelle Reedy.

The purchase agreement was signed on December 30, right before Maneke retired. “Paul knew the Alton community needed an independent jeweler, and we’re happy to be here now to provide Alton with great service,” Reedy added.

Alton is Reiniger’s fourth location. A soft opening of Reiniger’s new Alton store was held right before Valentine’s Day 2022. “We are pleased to have more and more business every day since,” noted Reedy.

They have two full-time employees and two part-time employees on-site to serve any needs customers might have. Two former Maneke employees are now part of the Alton team. “As a third-generation jeweler, Paul knows how important it is to continue to provide great quality jewelry and repairs to the community,” Reedy further noted.

In addition to providing various types of jewelry repairs and watch batteries, Reiniger Jewelers features a variety of gold and silver jewelry, a selection of engagement and wedding rings, and fine quality watches by Seiko. They also offer custom jewelry designs and insurance appraisals.

Reiniger Jewelers got its start with Paul’s grandfather in 1918 in East St. Louis, where it remained until 1969. Paul’s father then moved it to their home in Caseyville. It remained there until Paul opened the Swansea location in 1992. Their Swansea location was Paul Reiniger’s first. He opened his second store in Waterloo in 1993.

For more information about Reiniger Jewelers, call (618) 465-1410 or visit online at reinigerjewelers.com.

The RiverBend Growth Association is the Chamber of Commerce and Economic Development organization for the 11 communities known as the Riverbend. For more information about the Growth Association, please visit www.growthassociation.com or call (618) 467-2280.

This article was prepared for the RiverBend Growth Association by Melissa Meske Publications, macmeske.com.

We use cookies on our website to give you the most relevant experience by remembering your preferences and repeat visits. By clicking “Accept All”, you consent to the use of ALL the cookies. However, you may visit "Cookie Settings" to provide a controlled consent.
Cookie SettingsAccept All
Manage consent

This website uses cookies to improve your experience while you navigate through the website. Out of these, the cookies that are categorized as necessary are stored on your browser as they are essential for the working of basic functionalities of the website. We also use third-party cookies that help us analyze and understand how you use this website. These cookies will be stored in your browser only with your consent. You also have the option to opt-out of these cookies. But opting out of some of these cookies may affect your browsing experience.
Necessary Always Enabled
Necessary cookies are absolutely essential for the website to function properly. This category only includes cookies that ensures basic functionalities and security features of the website. These cookies do not store any personal information.
Non-necessary
Any cookies that may not be particularly necessary for the website to function and is used specifically to collect user personal data via analytics, ads, other embedded contents are termed as non-necessary cookies. It is mandatory to procure user consent prior to running these cookies on your website.
SAVE & ACCEPT